Paintball started in India in 2006. It is confined to metros. Speedball is the version followed in India. Combine the game of capture the flag with chess, mix in hide and seek and add a large dose of exhilaration, it is a challenging fast; thrilling game! 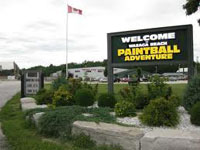 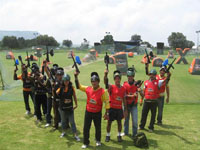 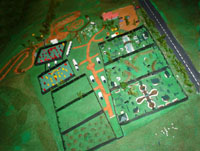 In paintball, groups of players shoot balls of paint at another person to get a goal. The objective is to stay in the game as long as possible without being hit.

This is just like a real war in which no harm and injuries in it, Anyone can play paintball who has guts, All you need is the brains to think, the eye to aim and the courage to shoot.

The most exciting part of the paintball game is the equipment. Equipment we have (markers, Mask, fill stations, paintballs (colors ball), chest protectors). How Hideaways Adventure can make your experience memorable- Paintball sport, by nature promotes teamwork and camaraderie. It is one of the most effective forms of stress release. It is the thrill of the hunt; it's the fast paced action, blood-pumping, heart stopping game but 200 percent safe. Paintball is a sport in which players compete, in teams or individually, to eliminate opponents by hitting them with capsules containing food coloring and gelatin (referred to as paintballs) propelled from a device called a paintball marker. Paintballs have a non-toxic, biodegradable, water soluble mineral-oil. The game is regularly played at a sporting level with organized competition involving worldwide leagues, tournaments, professional teams, and players. Paintball technology is also used by military forces, law enforcement, Para-military and security organizations to supplement military training, riot response, and non-lethal suppression of dangerous suspects.