The Holy Himalayas up in the misty heights of the majestic Garhwal Himalayas that adorn the magnificent state of Uttaranchal, awaits a rejuvenating spiritual experience for the devout.

Nestling in the lofty peaks are the four most holy pilgrimages of India -Yamunotri, Gangotri, Sri Kedarnathji and Sri Badrinathji, collectively referred to as the Char Dham ( or four pilgrimage centres) of Hinduism. For centuries, saints and pilgrims, in their search for the divine, have walked these mystical vales known in ancient Hindu scriptures as 'Kedarkhand'.

If the scriptures of HINDU RELIGION are to be believed, the holy centres of Gangotri, Yamunotri,Badrinath and Kedarnath - collectively called theChardham (meaning four sacred spots) - are the mostsacred of all pilgrimages. Undertaking a journey to these places will not just wash away one's sins butensure release from the cycle of birth and death. The honour conferred on these places is not surprising. 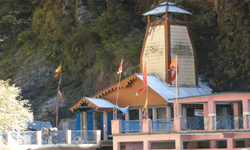 The shrine of Yamunotri, situated at an elevation of about 3,235 m is a point of paramount religious importance for Hindus and an essential pilgrimage. Situated in the direction opposite to Gangotri, the road bifurcates from a place called Dharasu, somewhere between Rishikesh-Uttarkashi and goes on to Yamunotri. The shrine can also be visited via Mussoorie and Barkot.

The shrine of Gangotri is situated at an elevation of 3048 m amidst captivating surroundings. Gangotri is located at a distance of 99 km from Uttarkashi. The temple, constructed by the Gorkha General Amar Singh Thapa, in the 18th century, is situated on the left bank of Bhagirathi. It is visited by lakhs of pilgrims every year. A number of ashrams are located on the other side, some of which provide accommodation facilities to the visitors. 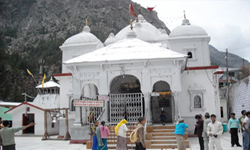 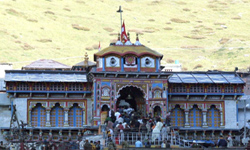 Guarded on either side by the two mountains Nar and Narayan, the Neelkanth Peak provides a splendid backdrop to Badrinath, one of the 'Four Dhams'. One of the most celebrated pilgrim spots in the country, it plays host to the famous Badrinath Temple. Legend has it that Lord Vishnu came to the area, called 'Badri Van', or the berry garden, to meditate after Narad rebuked the Lord for being immersed in worldly pleasures. The main deity is a meditating Lord Vishnu.

Amidst the dramatic mountainscapes of the majestic Kedarnath range stands one of the twelve Jyotirlingas of Kedar or Lord Shiva. Lying at an altitude of 3584 m on the head of river Mandakini, the shrine of Kedarnath is amongst the holiest pilgrimages for the Hindus. There are more than 200 shrines dedicated to Lord Shiva in the district itself, the most important one is Kedarnath. 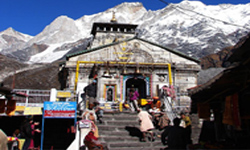